In April to May 2019, the coral reefs near the French Polynesian island of Moorea in the central South Pacific Ocean suffered severe and prolonged thermal bleaching. The catastrophe occurred despite the absence of El Niño conditions that year, intriguing ocean scientists around the world.

An international research team led by Prof. Alex WYATT of the Department of Ocean Science at The Hong Kong University of Science and Technology, has investigated this surprising and paradoxical coral bleaching episode. The unexpected event was related to the passage of anti-cyclonic eddies that elevated sea levels and concentrated hot water over the reef, leading to an underwater marine heatwave that was largely hidden from view at the surface. The findings have recently been published in Nature Communications.

Most studies of coral bleaching patterns rely on sea-surface measures of water temperatures, which cannot capture the full picture of threats from ocean heating to marine ecosystems, including tropical coral reefs. These surface measurements conducted over broad areas with satellites are valuable, yet are unable to detect heating below the surface that influences communities living in waters deeper that the shallowest few meters of the ocean.

Prof. Wyatt and colleagues analyzed data collected at Moorea over 15 years from 2005 to 2019, taking advantage of a rare combination of remotely sensed sea-surface temperatures and high-resolution, long-term in-situ temperatures and sea level anomalies. Results showed that the passage of anti-cyclonic eddies in the open ocean past the island raised sea levels and pushed internal waves down into deeper water. Internal waves travel along the interface between the warm surface layer of the ocean and cooler layers below, and, in a previous study also led by Prof. Wyatt, have been shown to provide frequent cooling of coral reef habitats. The present research shows that, as a result of the anti-cyclones, internal wave cooling was shut down in early 2019, as well as during some earlier heatwaves.  This led to unexpected heating over the reef, which in turn caused large-scale coral bleaching and subsequent mortality. Unfortunately for local reef biodiversity, the extensive coral death in 2019 has offset the recovery of coral communities that had been occurring around Moorea for the last decade.

A notable observation, in contrast to the 2019 heatwave, was that the reefs in Moorea did not undergo significant bleaching mortality in 2016, despite the prevailing super El Niño that brought warm conditions and decimated many shallow reefs worldwide. The new research demonstrates the importance of collecting temperature data across the range of depths that coral reefs occupy because the capacity to predict coral bleaching can be lost with a focus only on surface conditions. Sea-surface temperature data would predict moderate bleaching in both 2016 and 2019 at Moorea. However, direct observations showed that there was only ecologically insignificant bleaching in 2016, with heating that was short in duration and restricted to shallow depths. The severe and prolonged marine heatwave in 2019 would have been overlooked if researchers only had access to sea-surface temperature data, and the resulting catastrophic coral bleaching may have been incorrectly ascribed to causes other than heating.

“The present study highlights the need to consider environmental dynamics across depths relevant to threatened ecosystems, including those due to the passage of underwater ocean weather events.  This kind of analysis depends on long-term, in situ data measured across ocean depths, but such data is generally lacking,” Prof. Wyatt said.

“Our paper provides a valuable mechanistic example for assessing the future of coastal ecosystems in the context of changing ocean dynamics and climates.”

This HKUST-led research was conducted in collaboration with a team of scientists from Scripps Institution of Oceanography at the University of California San Diego, the University of California Santa Barbara, California State University, Northbridge, and Florida State University. The data underlying this study were made possible by coupled long-term physical and ecological observations conducted at the Moorea Coral Reef Long-Term Ecological Research (LTER) site. The long-term analyses conducted here, and the concurrent monitoring of physical conditions and biological dynamics across the full range of depths of island and coastal marine communities, is a model for future research that aims to protect vulnerable living resources in the ocean. 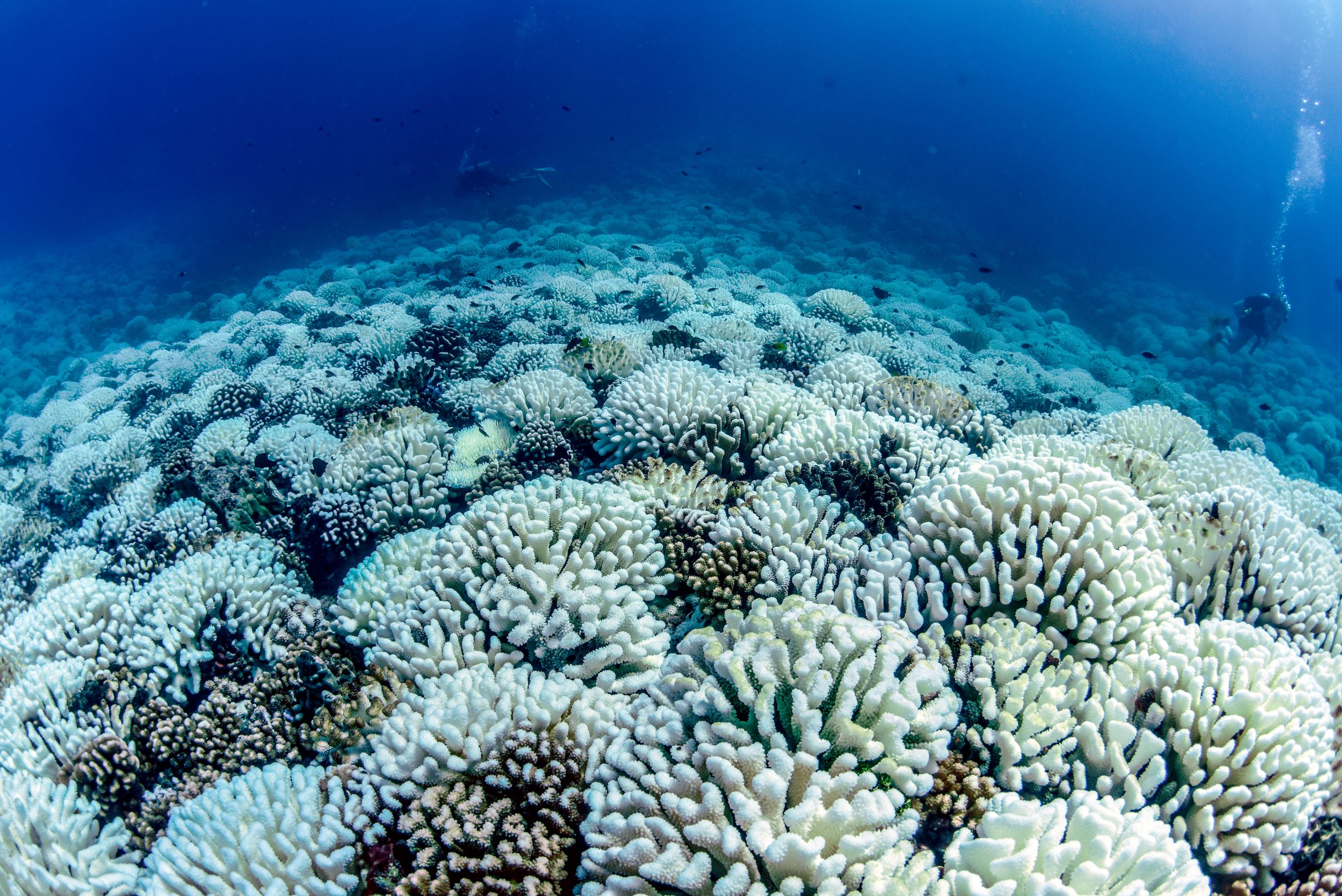 Extensive coral bleaching occurred across depths on the north shore of Moorea during the 2019 marine heatwave.